To commemorate the 40th anniversary of the signing of the China-Japan Treaty of Peace and Friendship, promote people-to-people and cultural exchanges between Guangdong Province and Japan, and further enhance China-Japan friendship, from March 26 to 31, 2018, a 46-member delegation of Wakayama Children’s Choir visited Guangdong and took part in a China-Japan youth exchange chorus concert hosted by the Guangdong People’s Association for Friendship with Foreign Countries (GPAFFC) and co-organized by Guangdong Experimental High School.

On March 30, GPAFFC and the Japan-China Friendship Association of Wakayama Prefecture jointly held the “Guangdong-Wakayama Youth Exchange Chorus Concert” at the Symphony Hall of Xinghai Concert Hall, with the theme of “Never Forget Our Original Aspiration and Build Our Future.” Li Xiaolin, President of the Chinese People’s Association for Friendship with Foreign Countries (CPAFFC), Toshihiro Nikai, Secretary-General of the Liberal Democratic Party of Japan, and Masahiro Obana, Mayor of Wakayama City, sent their letters of congratulation. In their speeches, Ouyang Jiangxuan, Vice President of GPAFFC, and Nobutada Iwahashi, head of the Wakayama Children’s Choir, said that the youths of both China and Japan should shoulder the mission of deepening friendship between the two countries. This year marks the 40th anniversary of the signing of the China-Japan Treaty of Peace and Friendship, and such a joint event is of special and positive significance for promoting mutual understanding and friendship between the two peoples. With their beautiful voices, the Chinese and Japanese teenagers eulogized friendship and expressed good wishes for the peace and development of mankind. At the end, they sang a song in Chinese and Japanese together, which won warm applause from the audience. 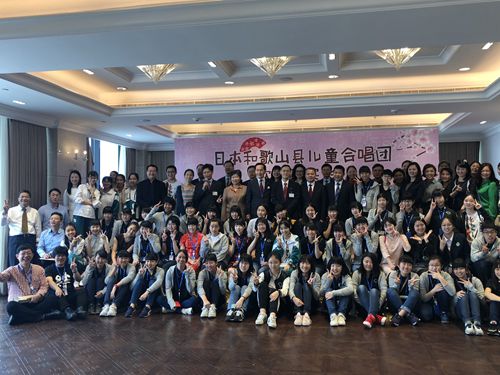 During their stay in Guangdong, the delegation also visited Guangdong Experimental High School and South China Agricultural University, and gave a music performance with the chorus of South China Normal University. To enhance mutual understanding and their friendship, Guangdong Experimental High School arranged homestay for 38 Japanese youth members so that they could experience their living and local customs.