The movie, Coffee or Tea, hit 300 million RMB at the box office in 2020 and drew great attention to the recent trend that more people have started developing their business in China’s rural areas. In this episode, Newsgd.com invited Gianluca Zoppa, an Italian actor who played a role in the movie to share insight into the rural revitalization strategy and how it helps to improve people’s livelihood in China. 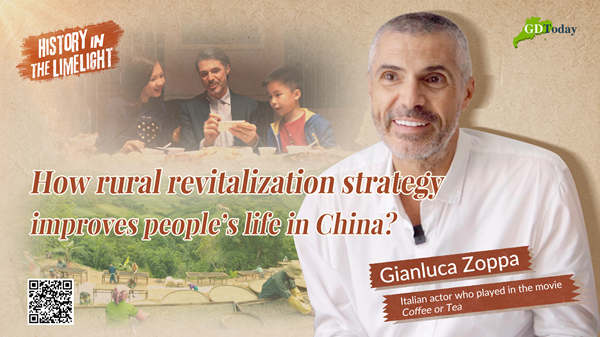 “Yunnan coffee is a type of every-day coffee to me. It’s not too strong or too light,” said Gianluca Zoppa handing us a cup of Yunnan coffee which he made out of an Italian coffee pot, “the movie reflects a reality that there are many potential resources in the rural areas. It might be difficult to help people understand at the beginning but time will tell if the product is good. Now you can see Yunnan coffee in most global chain stores.”

In the movie, Coffee or Tea, three young men quit their city jobs, went to an old village in Yunnan province and tried to develop their coffee business there. This is a trend recently in China especially after the Communist Party of China (CPC) put forward the rural revitalization strategy as one of the highlights of the 19th CPC National Congress in 2017. The strategy aims at developing rural areas and improving the livelihood of rural people, which is also a major task when it comes to achieving the Party’s goal of comprehensively building a moderately well-off society.

Gianluca Zoppa believes China’s well-developed transport and logistic networks make rural areas more connected and enable people to visit, explore and eventually start their business there. “I came to Guangzhou in about 2003 for my trading business so I traveled a lot to meet suppliers in Guangdong. At that time, we had to take the bus with the beds inside to travel from Guangzhou to Jieyang, a city in the Southeast of Guangdong. And it took us about 8 hours. But now, it’s a 3-hour trip by the high-speed train.”

Apart from infrastructure construction, the CPC has released a variety of measures to boost rural development such as developing rural industries, strengthening ecological civilization construction and improving rural governance. With all these efforts, China declared in February 2021 that it has lifted all rural poor people out of extreme poverty under the current annual income standard, with 832 counties, 128,000 villages, and nearly 100 million impoverished people shaking off poverty.

“I visit Huizhou a lot because it’s the hometown of my wife. Compared to 20 years ago, you can definitely tell the changes in the city. I burst into an industrial area the last time I went there. I was surprised that there are so many big factories and big companies,” said Zoppa, “people are happy as well. They want to enjoy life, always go outside and meet their friends.”

Gianluca Zoppa has been to many countries but he chooses to stay in China. “This country gives me opportunities that I couldn’t have anywhere else. I plan what I want to do, work hard and have more changes to achieve the targets. As an independent director, it’s difficult to look for locations and actors with a very low budget. But in China, every door I knocked was open to me. People believe in me and support me with a smile. ”

Zoppa said he was impressed by how fast China has been developing over the past decade. He moved from Tianhe, the CBD of Guangzhou, to Huangpu, a newly developed district, and he found the surrounding environment changed drastically in a very short amount of time. “It was countryside around my apartment previously but now you can see, it’s so modern with these tall buildings around!”

When former Chinese leader Deng Xiaoping used the term “xiaokang society” in 1979 as the goal of Chinese modernization, he was thinking of a China that would one day become a nation where economic prosperity is capable of moving most of the population into comfortable means. The 18th CPC National Congress in 2012 proposed the idea of completing "the building of a moderately prosperous society in all respects" in 2020, with doubling China's 2010 levels of GDP and per capita income for urban and rural residents as one of the main criteria. And now China is closing in on its goal.

“China has been growing so fast because it’s in the DNA of the Chinese people,” said Zoppa, “they always want something new and something different. They always want to improve and do better. This country doesn’t sleep!”