Chen said that there are more than 1,000 Korean enterprises developing in Guangdong. Last year, the volume of import and export trade between Guangdong and South Korea reached 1/4 in the total trade volume between China and South Korea. In June this year, the Seventh China (Guangdong) - South Korea Development Exchange Symposium was successfully held in Huizhou, where also sees the construction of the China Korea (Huizhou) Industrial Park. The bilateral cooperation in various fields has yielded fruitful results and has broad prospects.

Chen said that at present, Guangdong is actively participating in the construction of “The Belt and Road” and the Guangdong-Hong Kong-Macao Greater Bay Area. The Republic of Korea has rich experience in enterprise innovation, therefore the two sides can work together to have better cooperation in the future. He hoped that “China (Guangdong) - Korea Friendship Week” will be a new starting point for the bilateral cooperation. Guangdong and South Korea should take this opportunity to enhance understanding and to deepen cooperation in economy and trade, culture, tourism and other fields.

Lu Yingmin expressed that the Republic of Korea is willing to expand the fields of cooperation with Guangdong, especially to further strengthen practical cooperation in the field of high technology. He expected more Korean enterprises can join in the China Korea (Huizhou) Industrial Park. 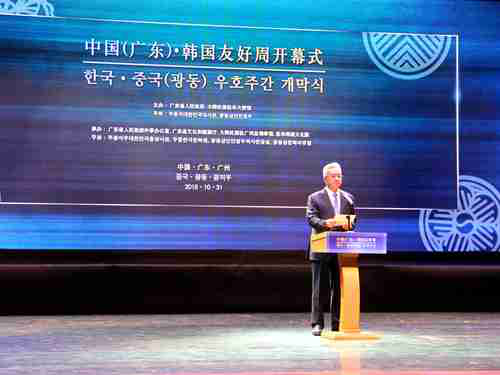