Chen Liangxian firstly extended warm regards and best wishes to all Turks working, studying and living in Guangdong. He said that since the establishment of the diplomatic relation between China and Turk in 1978, the bilateral relations have continued to develop, contributing positively to regional peace and development. In this background, Guangdong and Turkey have made frequent exchanges and cooperation in the fields of economy, trade, tourism and culture. Good cooperation has also promoted friendly local exchanges. Friendly-relations have been established between Guangdong Province and Istanbul Province and between Guangzhou and Istanbul.

At present, adhering to the decisions and plans made by the Central Committee of CCP and taking the 40th anniversary of reform and opening up 40th as a new starting point, Guangdong is striving to realize the goal of “Four Leading Positions in the Country”, striving to perform well the “Two Important Windows”, vigorously improving the performance of Guangdong’s open economy, participating in the construction of “The Belt and Road”, deepening the reform and opening up of the China (Guangdong) Pilot Free Trade Zone, and jointly building Guangdong-Hong Kong-Macao Greater Bay Area. Under the important consensus reached by the Heads of State of China and Turkey, Guangdong is willing to actively synergize “The Belt and Road” initiative and the “East-West Middle Corridor” initiative so as to further expand practical bilateral cooperation in various fields.

Consulate General of the Republic of Turkey in Guangzhou, Bora, said that 2018 is the year of tourism between Turkey and China. He hoped to promote further exchanges and cooperation with Guangdong in the fields of economy, trade, tourism and culture in the context of the Belt and Road” construction . 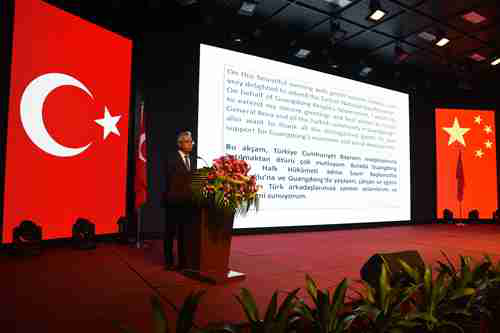