On the afternoon of March 13, Ouyang Weimin, the Vice Governor of Guangdong Provincial People's Government, met in Guangzhou with Masood Khalid, Pakistani Ambassador to China.

Ouyang Weimin welcomed Masood and said that the friendship between China and Pakistan is deeply rooted in the hearts of the people. The two peoples are like brothers. He said that in recent years, with the in-depth development of the "Belt and Road" international cooperation and exchanges between Guangdong and Pakistan in the fields of economy, trade, tourism, higher education, and humanities have developed rapidly, and cooperation has achieved remarkable results. Ouyang Weimin said that the exchange of friendship between the two places has already had a good foundation for cooperation. The two sides should continue their efforts and make in-depth contacts to promote the good relations between Guangdong Province and Punjab. It is hoped that together with the Pakistani Embassy in China and the Consulate General in Guangzhou, we will continue to promote exchanges between the two places in the fields of trade, tourism, education, infrastructure and agriculture, deepen friendship and strengthen cooperation.

Masood said that with the long history of friendship between China-Pakistan and under the “Belt and Road Initiative", a continued and deepened cooperation with Guangdong is expected in the fields of agriculture, education, food processing, and industry, and establishment of friendly contacts at provincial level will be promoted. 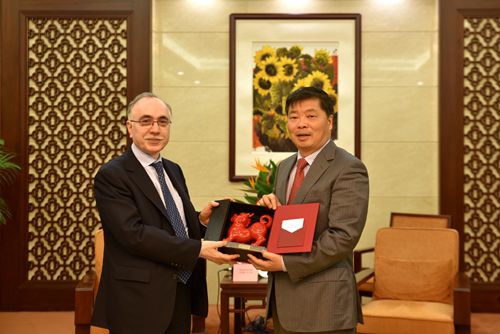