On March 7th 2018, Vice Governor Ouyang Weimin met with the Ambassador of the Republic of Ecuador to China H.E. Carlos Larrea Dávila.

On behalf of the People’s Government of Guangdong Province, Ouyang extended a warm welcome to the Ecuadorian Ambassador. Ouyang believed that the development of socialist economy in Guangdong was conducive to increased cooperation with Ecuador. Adhering to the national policy of reform and opening up, Guangdong will create an all-dimensional, opening pattern. In doing so, Ouyang pointed out, the Guangdong People’s Government would hope to join hand with the Ecuadorian Embassy to China and the Ecuadorian Consulate General in Guangzhou to strengthen cooperation and advance exchanges in such fields as trade, tourism and culture.

Ambassador Larrea said that this was his first visit to Guangdong after he assumed the office. He hoped to facilitate cooperation between Ecuador and Guangdong Province in business, trade, culture and agriculture. He also actively advocated the opening of a direct flight between China and Ecuador. 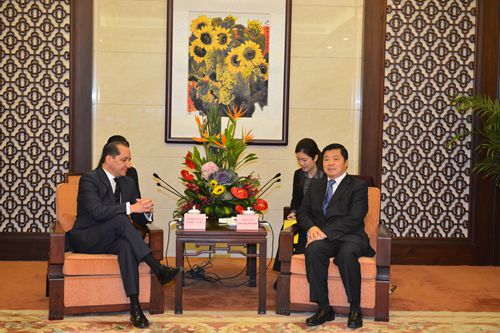 Also present at the meeting were Deputy Secretary of Guangdong Lin Ji and Deputy Director of Foreign Affairs Office of Guangdong Luo Jun.