On October 18th, Vice Governor Huang Ningsheng attended the National Day Reception held in Guangzhou by the Consulate General of the Republic of Korea (ROK) in Guangzhou.

Huang Ningsheng firstly extended sincere greetings and best wishes to all Korean friends who work, study and live in Guangdong. He said that as a pioneer in China's reform and opening up and a major province in economy, Guangdong has closely cooperated with ROK. From January to July this year, the total import and export trade volume of the two sides continued to increase by 9.7% year-on-year, with a good development momentum. Huang Ningsheng pointed out that in accordance with the decision of the central government, Guangdong is vigorously improving the open economy from the new starting point of the 40th anniversary of reform and opening up of China. The province is fully engaging in the “Belt and Road” construction, deepening the reform and opening up of the Guangdong Pilot Free Trade Zone, promoting the Guangdong-Hong Kong-Macao Greater Bay Area construction, striving to achieve the "Four leading positions of the country” and play well the role of "Two important windows”. Guangdong and ROK are natural partners with close cultural contacts and strong economic complementarities. With the important consensus reached by the heads of state of China and ROK, Guangdong is ready to further deepen exchanges and cooperation with ROK in the fields of economy, trade, science and technology, education and humanities, etc.

Consul General of ROK in Guangzhou Hong Xingxu said that the Korean Consulate General in Guangzhou will play well its role of bridge and link to promote exchanges and cooperation between the two places in the fields of economy, trade, culture and emerging industries, etc. 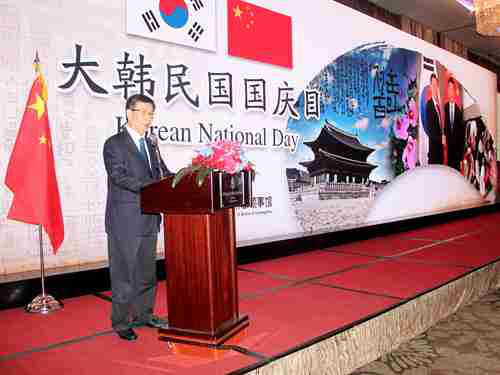