On Nov. 26, Deputy Secretary-General of the People’s Government of Guangdong Lin Ji attended the opening ceremony of the Venezuelan Consulate General in Guangzhou.

Lin Ji firstly congratulated on the opening of the Venezuelan Consulate General in Guangzhou. He said that with the promotion of the leaders of the two countries and the joint efforts of the both sides, the relationship between China and Venezuela have maintained a good trend of development. Statistics has it that there are approximately200,000 overseas Chinese in Venezuela, more than 80% of which come from Enping of Guangdong.

Rodríguez, Vice President of the PSUV and Governor of Estado Miranda came to attend the opening ceremony, and expressed his thanks to the Guangdong Provincial Government for its support for the opening of the Venezuelan Consulate. He said that Guangdong is in an important position in Venezuela's cooperation with China and he hoped to promote cooperation in the fields of economy, trade, investment and humanities with the establishment of the Consulate General in Guangzhou.

Ambassador Liu Yuqin, Special Representative of the Chinese Government on Latin American Affairs, and other representatives of the Ministry of Foreign Affairs came to Guangdong to participate in relevant activities. 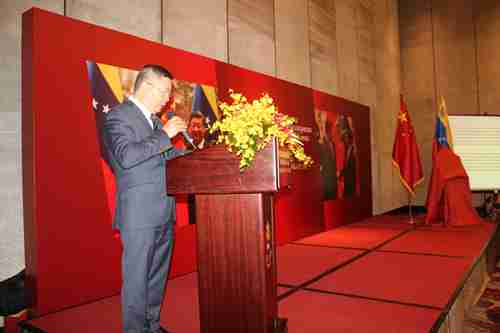